Another addition to my slow growing Mitsubishi Lancer Evolution collection.
This time its from the 2007 Rally Monte Carlo which was held on the 18th of January up to the 21st. This era of the Mitsubishi Rally Team was in fact one of those I would say the end of an era for Mitsubishi when we talk about the WRC. Nevertheless, the Mitsubishi Lancers deep roots into rallying is what makes me stick into collecting these gems, and of course my occasional Group B favorites hehe!
This Mitsubishi Lancer Evolution WRC was driven by Xavier Pons with co driver Xavier Amigo which only landed them in 20th place in group A with a total time of 3:45.39 in 1185.02km of mostly asphalt roads including 328.54km of over 15 special stages.
Diecast in 1:43 scale by IXO Models 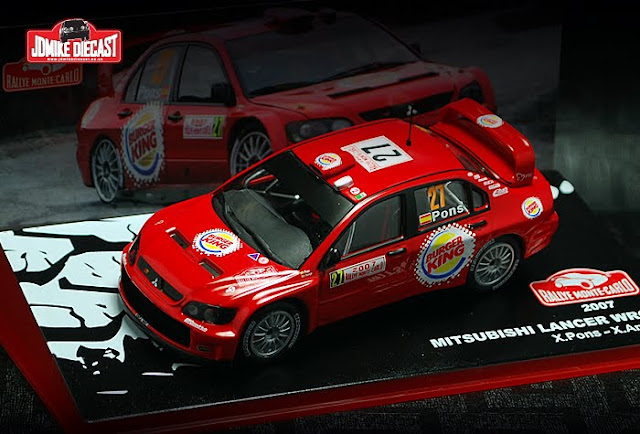 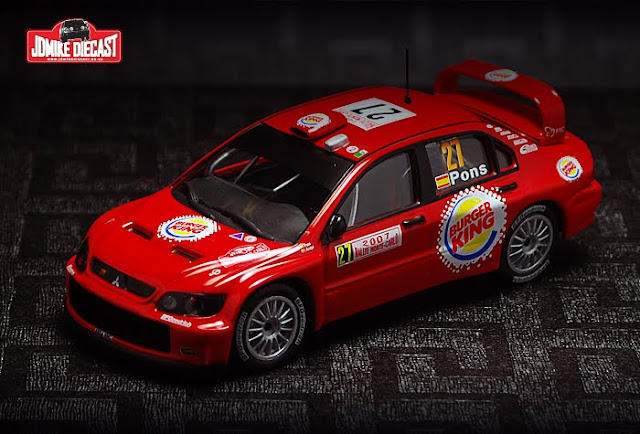 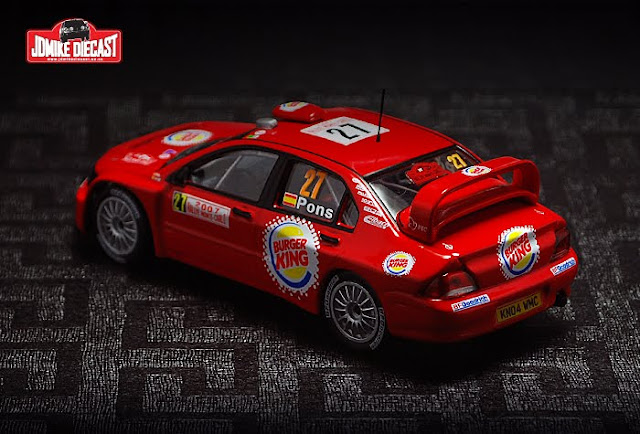 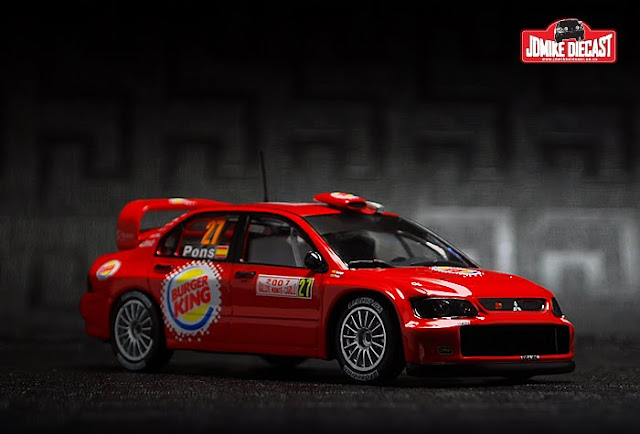 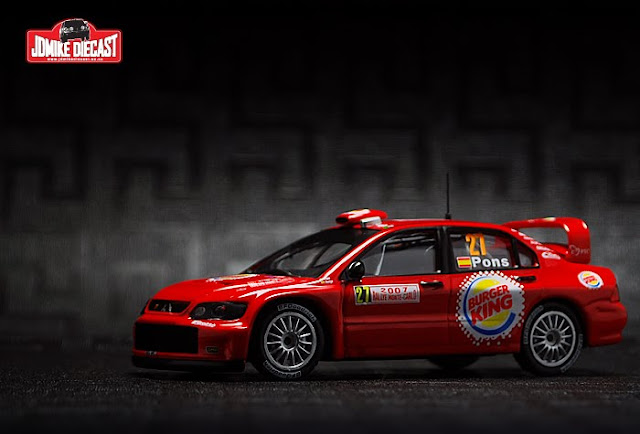 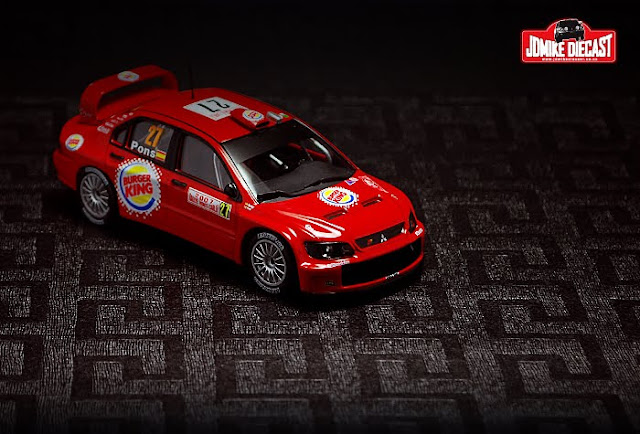 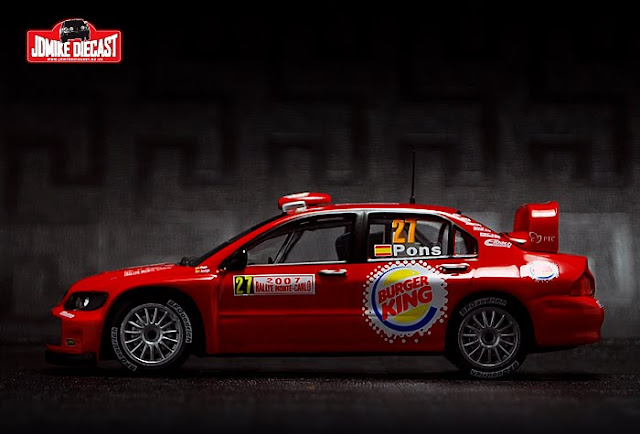 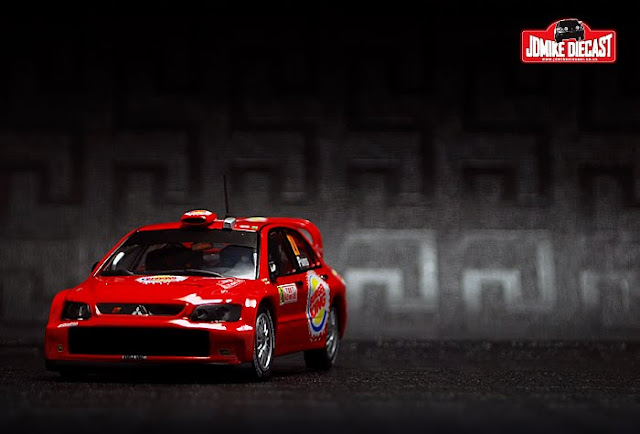 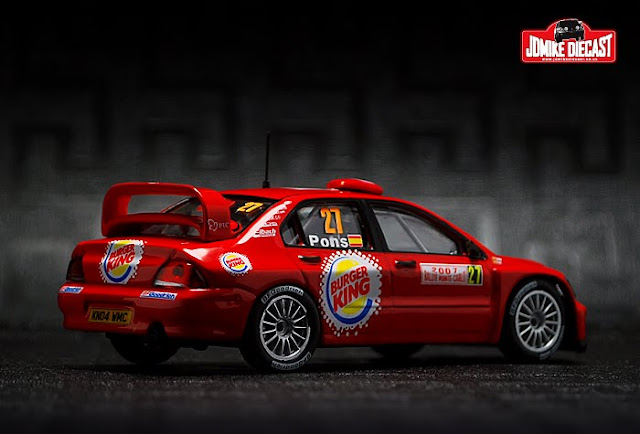 Posted by JDMike's Diecast Site at 8:07 AM

Marvelous Mit.EVO WRC rally car with a "surpricingly" special sponser that i never come across.
1st is the burger logo , the original decal like ralliart , hotwheel seems not there.

Anyway is a beautiful car.

It seems the postman delivered a large carton of Ixo/Altaya "Monte Carlo" series models right to your door. They're all beautiful, so keep them coming!

What can i say?... the above already sad (?) everything... aahh, great photos, like always!

photographing this car made me hungry!! hehe!
thanks again guys!

Sir Laurent, not really that much came from the mailman nowadays, just a few boxes now and then, wish it would be a lot hehe!

One question though, how do you know if a model is just plain IXO or an IXO/Altaya? Are the ones with pictures included in rear of their box bases all IXO/Altayas? Thanks for clearing this up. :-)

Yes, since a few years Altaya made an habit of presenting the Ixo models it distributes with a printed card at the back of the box. A picture of the original car serves as background, while basic characteristics are printed on reverse. As far as I remember the first series to adopt this presentation was "Les belles années Simca".

ok, big thanks for that info sir Laurent, now I won't be guessing anymore hehe! :-)

You're welcome Mike. Actually that's funny that you asked this question as a few days ago I was thinking about adding on my blog a recap of all these press series with lists of models released. Now, I'm decided sure to do it one of these days.

i cant stop say it, i envy your wrc car collection xD, congratz, and nice model!!!!!!

wow, now I'll be looking forward to that sir Laurent! Thanks! :-)

thanks also for appreciating Mervin and Ricardo! :-)

I want to speak you anything. My e-mail is interdomin@gmail.com.

Send me a burger here in Taipei :) Red is my favorite color and that car is hot.

thanks Brian! got me hungry also! :-)